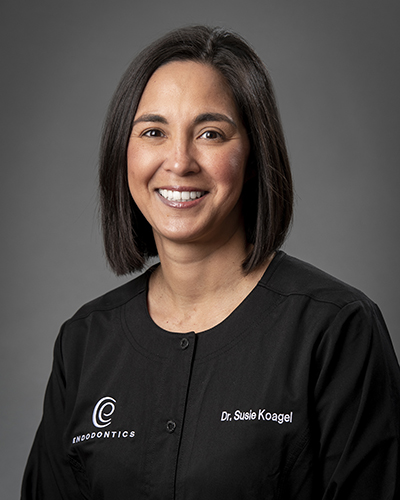 Dr. Susie Koagel grew up in a military family and lived in North Carolina, Korea, Japan, and Alabama. She attended college at Appalachian State University in Boone, North Carolina, obtaining her Bachelor of Science degree in Biology. Following her father’s footsteps, who had served more than 20 years in the Army as a helicopter pilot, Dr. Koagel was commissioned in the US Army. She attended the University of Florida College of Dentistry and received her Doctorate of Dental Medicine.

After obtaining her dental degree, Dr. Koagel completed a one-year advanced general dental residency at Ft. Lewis, Washington, where she realized her love for endodontics. She completed her endodontic specialty training at Fort Bragg, North Carolina. She was then stationed at Ft. Bliss, Texas and Ft. Benning, Georgia. After ten years in the active Army, Susie transitioned to serve part time as a Major in the Georgia National Guard.

Susie along with her husband and her three children are pleased to have made Georgia their home. When she is not practicing endodontics, she enjoys spending time with her family, cooking, and traveling.